All about World Wide Smiles Ltd

We are a small group of professional Clowns who, in 1997, decided to form a charity with the aim of promoting the well-being and welfare of children and adults suffering from poverty and the effects of natural and man-made disasters through the medium of the performing arts of comedy and clowning – taking SMILES to children and adults wherever they are desperately needed in the world.

The World Wide Smiles (Mission) was started in February 1997 in England by Terence “Blanco the Clown” Brown after his visit to St Petersburg in December 1996. During that stay he and a Russian Theatre Group gave a Christmas Show and he asked for the show to be taken to a few orphanages where the children received a small gift after the show. This is how his dream became a reality: to surprise poverty-stricken children – with the help of lots of people – with a free performance and a small gift.

At the Clowns International Utrecht Clown Festival in Holland in 1997, Blanco discussed this with Maria “Clown Masjolie” from Ulft, Holland who liked the idea. This resulted in four Dutch Clowns and ten English Clowns from Clowns International (clownsinternational.com) attending a mini Clown Festival in St Petersburg in December 1997 in association with the Raz Dva Trie Pantomime Theatre Company, where they handed out sponsored and donated gifts after the show, and also visited orphanages and hospitals and performed street shows.

Blanco (UK) and Masjolie (Holland) decided to form the World Wide Smiles (Mission). On her return to the Netherlands, Masjolie formally registered the project as a charity Foundation and became the first (and incumbent) President. The Foundation Registration Number at that time was: K.v.K. Arnhem 09101278. Since 2007, the group has taken the decision to operate and perform under the name of “World Wide Smiles“, because the word “Mission” seemed to indicate that we are a church or religious-based charity when it is not.

From these small beginnings, the group went back to St Petersburg to clown in hospitals and orphanages. They followed this with two missions to Poland and three to Romania, again visiting many orphanages and hospitals.

In Romania, many Romany Gypsy settlements were visited, which consisted of no more than rudely made mud huts (see our report and Gallery of Photos), with roofs made of whatever could be found at rubbish tips. A whole family would sleep in the hut at night, together with their dogs to keep the rats out! Subsequently, World Wide Smiles were able to work with the Mother Therese Foundation who have an on-going programme to find sponsors to finance the building of small two-roomed houses for the Roma Gypsy families, complete with communal wash house and clean well water for drinking.

In 2004, the Eurotunnel PLC sponsored our British Clowns through the Channel Tunnel which enabled World Wide Smiles to travel to war-torn Kosovo (formerly part of Yugoslavia) where there is still an uneasy peace following a bitter civil war. Some of Kosovo’s neighbours still do not recognise the new independent country. We visited and entertained at many different places including schools, gypsy camps, orphanages, Christian centres and a battered wives retreat. We also lectured in the capital city’s University.

When the Tsunami hit Asia in December 2004, the group decided its SMILES were desperately needed in that area. Masjolie found a contact already working in Sri Lanka: they were trying to re-locate children who had lost all their family and were working alongside the Education Department trying to get children to return to school. Many children were traumatised and living on the streets. So the tour was agreed and arranged for October 2005. Because of the great distances involved, it presented some difficult financial and logistic problems as the group needed to fly with their clown props. Previous trips (with the exception of St Petersburg) had always been made using a Van or cars (Kosovo was a two-day drive through Holland, Germany, Austria and former Yugoslavian states, similarly Romania and Poland). However, with the help of discounted flights from Sri Lanka Airlines and the help and generosity of many clown colleagues and the Centrum Festival committee in Ulft, Holland, the required sponsorship was raised!

Please see our separate pages for Reports and Photos of our various SMILES Tours, and the fund-raising Centrum Clown Festival in Ulft, Holland.

In 2006 we returned by invitation to tour to various hospitals, orphanages and special needs schools in the Katowice region of Poland, whilst in 2007 and 2010 we accepted invitations from the Mother Therese Foundation to once again tour and perform in East Romania.  2009 saw us take smiles further afield: to Kolkata in India for SEED (Society for Education and Economic Development)!  See full information and reports on all these tours on other pages.

We look forward to your return visit to our site as we will be updating our pages with further reports on our ongoing SMILES Charity events! If you are able to help with a donation or other offer of help, please contact us by e-mail (see our Contact page).

Would you like to show your support for World Wide Smiles?  We now have a Group Page on Facebook: please sign-up and join our support Group! – there’s no cost involved 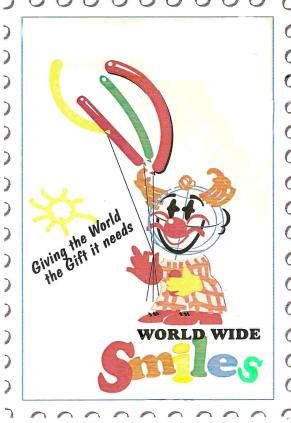